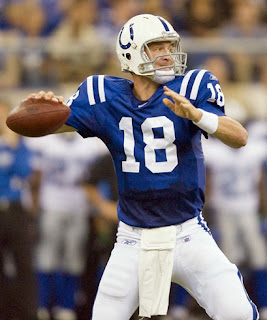 Years ago, a couple of football teams in the NFL had a choice to make about who to draft as their next quarterback.  The choices were Ryan Leaf and Peyton Manning, two great college players.
Stats wise, both were about equal, with completion percentages above 55% and QB ratings around the 150 mark.  However, when they hit the pros, the tables turned.  Manning became one of the greatest quarterbacks in NFL history.  Leaf has disappeared from sight after a disastrously short career.
The question is why.
This morning I was listening to Dan Patrick for my sports radio fix.  He said that people that make great NFL quarterbacks love football and that for Ryan Leaf, he loved being famous, not football.  Manning became a great player because his great love for the game itself propelled him beyond other better than average players who lacked the same passion.
Thinking about that, vocation and calling came to my mind and how they relate to mission and ministry.
I wonder if we are really striving, as leaders, to get people into places that fit their calling and about which they are passionate.  Or, are we trying to fit round people into the square peg vocational places where we want and feel we need them.
If it is the latter, and we are unable to put aside our selfish desires to see our ministries grow and succeed, as opposed to seeing others grow, maybe that explains part of the reason we struggle to find the Peyton Manning leaders in our midst and settle instead for the Ryan Leafs.
Think about it...
Posted by Dave Miller at 9:46 AM