Back in the early days of Adventures in Life Ministry, we worked with a small congregation started by Pastor Alejandro [Alex] Corrales and his wife, Lilia.

The year was 1996 and we had helped Pastor Alex and his church buy the piece of land on which their new church now stands in Ensenada.

Chris Tong, [shown here with Pastor Alex] then the Youth Pastor at Warm Springs Baptist Church in Las Vegas, had called and he wanted to bring his group to help us get started. 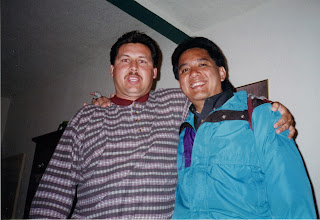 After a lot of discussion, Pastor Alex and his team, led by Alberto Montaño [below] decided that we needed to start with the fence around the property.  They said that in Mexico, it was very important that you identified your property and that a fence was the best way to do that.  And so Chris brought his group and they got started. 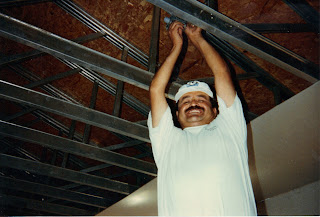 Very quickly the group got around half of the property, and then the fun started.  You see, the outside border was in a street.  A street that had been compacted by years of cars and buses driving on it.  When that dirt was hit with a pick, it just bounced, barely leaving a mark, exasperating the Americans who had come to work on that fence.

That’s when Sabino stepped in.  Sabino, who almost always had a smile on his face when he was working for Jesus, must have been 70 years old back then.  No one really knew his exact age, and neither did he!  He lived alone because when he came to know Christ, his wife and family left him.  That’s how it is sometimes in Mexico when you decide to follow Jesus… you go it alone. 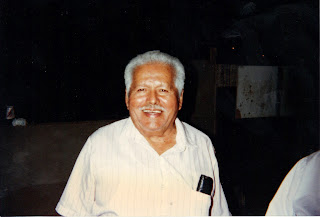 At 70 years of age, Sabino watched those kids and knew they would never get the trench dug in time to pour the concrete footings and build the block wall fence.

Grabbing his own pick, he started working.  Bit by bit Sabino sheared away the hardened dirt and within a few hours, we had a perfect trench where the Americans had been trying to dig for two days.

We finished the project that week because of Sabino and his determination to work hard for his Lord.

Soon a group from First Presbyterian Church of Huntington, West Virginia, led by Billy Craig came to serve.  And then a group from Los Angeles, a few from Oregon, San Francisco and many others places I cannot remember. 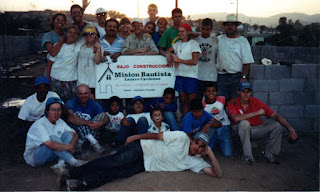 Everyday we worked, Sabino showed up to help in any way he could.  Mixing concrete, laying bricks, heating tar, it did not matter, Sabino was there until that church was finished and the people of that colonia in Ensenada had a place where they could go and worship God.

Much has changed since those early days for Pastor Alex.  He’s got two wonderful teenaged daughters, the church is full almost every week and they have started their own project to build a larger facility next door for the still growing congregation.  They are even sending short-term teams throughout Mexico to help other congregations like theirs build their own places to worship.

This month Pastor Alex and that little church we helped build, indeed, many of you reading this helped build, will celebrate their anniversary.  Sadly, Sabino will not be there as he passed on a few years ago.

Sabino is one of my spiritual fathers.  I cannot remember a day working at Alex’ church that Sabino was not there alongside me, encouraging and pushing me to be a better man for Jesus.

For me it is fitting that each June, the church Sabino loved and served, the church he helped build with his own hands, gets to celebrate not only earthly fathers, but our father in heaven, and their anniversary!

If you get a chance, find Pastor Alejandro Corrales on Facebook and wish him, his family, and his church, Fortaleza de Dios, well this weekend.