A New Reality... Funding the Great Commission through Short-Term Mission

This is the final piece detailing what I believe the church needs to do to address chronic funding issues as they relate to ongoing missions work around the globe.

Today I want to offer some real world suggestions for financing the Great Commission work of US churches around the world.

Let’s start with a few realities.

1. Short-term mission [STM] is here to stay.  Hundreds of thousands of people serve each year and STM is effectively a billion dollar industry when you factor in not only direct costs like fees and offerings, but travel and lodging.

2. Denominations are cutting back on their historical support of in-country missionaries as they scramble to fund their domestic operations and service churches closer to home base. This is forcing many log term people to have to learn themselves how to raise money to support their ministry and mission. 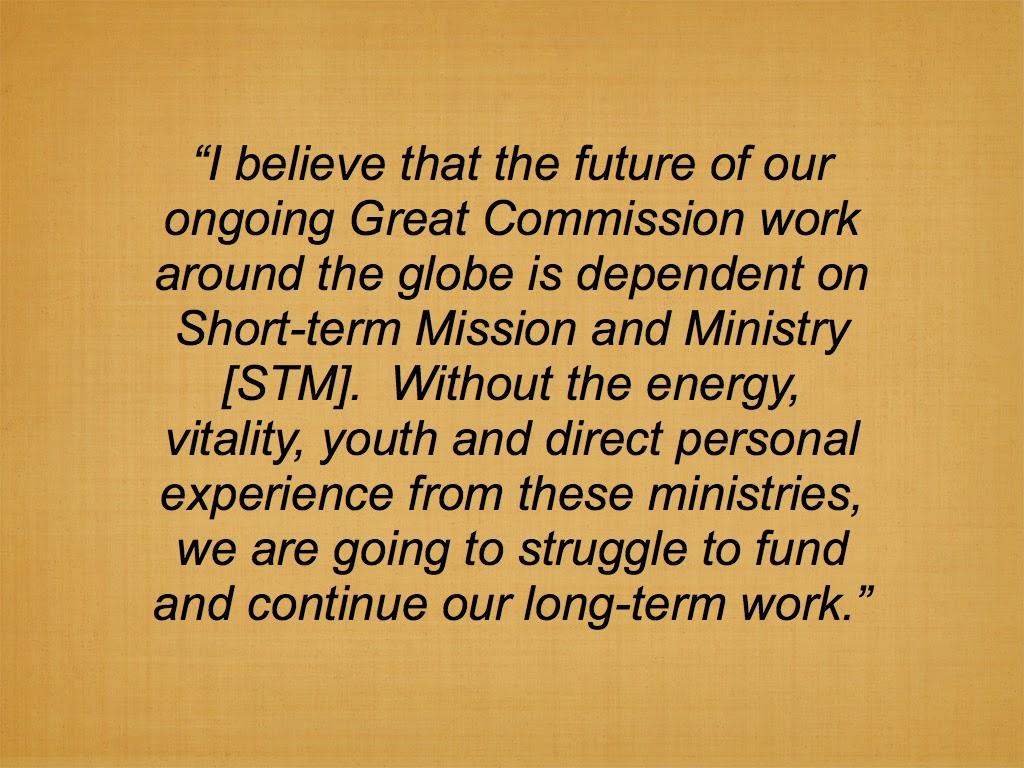 Case Study 1. Years back, the American Baptist Churches [ABCUSA] responded to a series of bad financial decisions by breaking a historic pledge to their in-country missionaries, telling them that they now had to build teams to help raise part of their personal support. Sadly, this was decided not as good missionary policy, which I believe it is, rather, in response to the denomination’s inability to continue funding their global missions force.

We need only look to the explosion of web sites like gofundme and shorttermmissions.com for evidence. In a tangential way, STM even made it into a Jeopardy episode a while back with the answer being “donor fatigue.” It's the feeling you get when you open the mailbox and see support envelopes from every student you’ve ever known.

I believe that the future of our ongoing Great Commission work around the globe is dependent on Short-Term Mission and Ministry [STM]. Without the energy, vitality, youth and direct personal experience from these ministries, we are going to struggle to fund and continue our long-term work.

So, what should we do?

First, long-term missionaries need to reorient their ministries to take advantage of this incredible resource and opportunity to call people to a long-term commitment to cross-cultural missions. 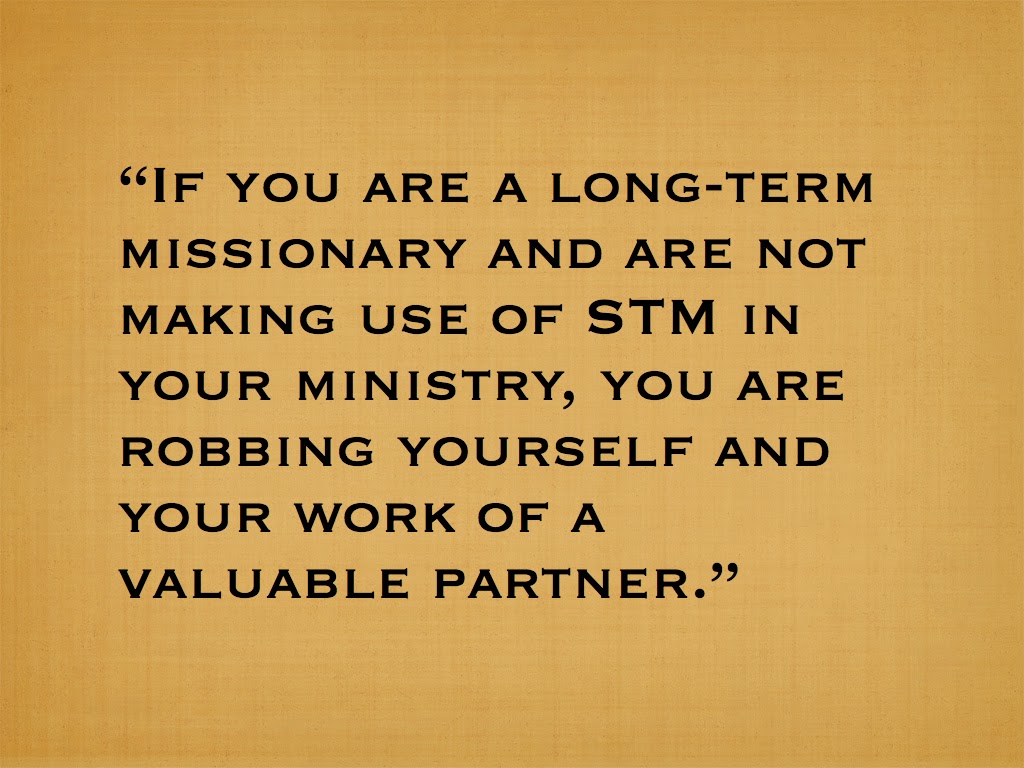 Gone are the days when these faithful servants served and lived their lives in isolation from anyone from their home country.  With the availability of relatively cheap, and quick air travel to even the most far off locale, folks are going to visit.

Simply put, there are people back home who want to visit and serve in other countries alongside knowledgable, God-loving people who are involved in God’s work over there. A long-term missionary in a stable country that is not open to short-term work, is a kingdom liability.

If you are a long-term missionary and are not making use of STM in your ministry, you are robbing yourself and your work of a valuable partner. Worse, you are refusing to develop relationships with the very people most interested in prayerfully and financially supporting your ministry over the long haul.

It is ironic that even as denominations like the ABC recognize the necessity of career missionaries building partnerships with potential donors, those missionaries who will benefit from these partnerships still try to keep STM involvement at arms length. The very people in country missionaries are casting aside as not worthy of their time and effort, are those that will organize people back home to raise money for their work and causes.

Does the seminary where you teach need a new computer lab? Do you need a financial shot in the arm to jump start a new church plant? Would you like to finally move that long hoped for project from the shelf of dreams to reality? Short-term mission can help you in all of these, and more.

As a career in-country missionary, the short-termer is your friend, not an enemy, or an adversary. He or she, is there in response to a call by God to serve you, your people and your ministry. Make use of them! Encourage them, and maybe one day they will be your biggest supporter, or even the much needed replacement to continue the ministry you spent a lifetime developing.

Next, we need to recognize that it takes strong leadership to do effective mission, and that leadership costs money. It takes even more money to sustain long-term mission. If you are choosing your short-term ministry site primarily because it is a cheap option, you need to rethink your priorities.

Talk to anyone who has served long-term in another country and ask them how long it took before they felt like they were beginning to understand the people and culture where they served. It has taken me more than 20 years to finally feel like I have a grasp on “some” aspects of the Mexican culture.

Without a doubt, I made a myriad of mistakes in my early years serving. Thankfully those mistakes were forgiven both by God, and those I harmed. Grace and forgiveness were accorded me from many different quarters in those days.But that grace only came as a result of a years of humble learning and servanthood.

However, the presence of grace and forgiveness should not be an excuse to not do all we can to ensure effective ministry. Often that means spending the money necessary to do mission and ministry right. The first step in this is partnering with a person or organization that has invested the time necessary to learn and understand not only the church culture, but the larger cultural issues where you are going to serve.

Church planter and missionary Roberto Guerrero of Del Camino Connection says that any ministry that thinks they can sustain an effective cross cultural partnership without someone standing between those two cultures is "doomed to fail."

Churches, groups and individuals need to repent of their cheap gene. In all my years of hosting short-term groups, the strongest partnerships we had were ones where I knew if something came up, the church, or group was prepared to respond. They had raised extra money for their mission, were looking for God’s guidance, often through the missionary they were supporting, and came with a generous spirit and the resources to back that up.

It is that spirit of giving, and the wisdom to plan for it that leads to my final point.

I've proposed this before, but with every passing day, it’s simpleness continues to gnaw at me. It is an idea first floated by Larry Hovis, Executive Director of the Cooperative Baptist Fellowship of North Carolina a few years back.

After figuring out your cost for short-term mission, each and every leader and participant on a team should agree to raise double those fees. Let’s face it, those people on short-term teams have huge networks of friends and family that are not even part of our local faith communities. Those networks, and the people that make them up, are going to be personally vested in making sure little Billy raises the money he needs to be successful. 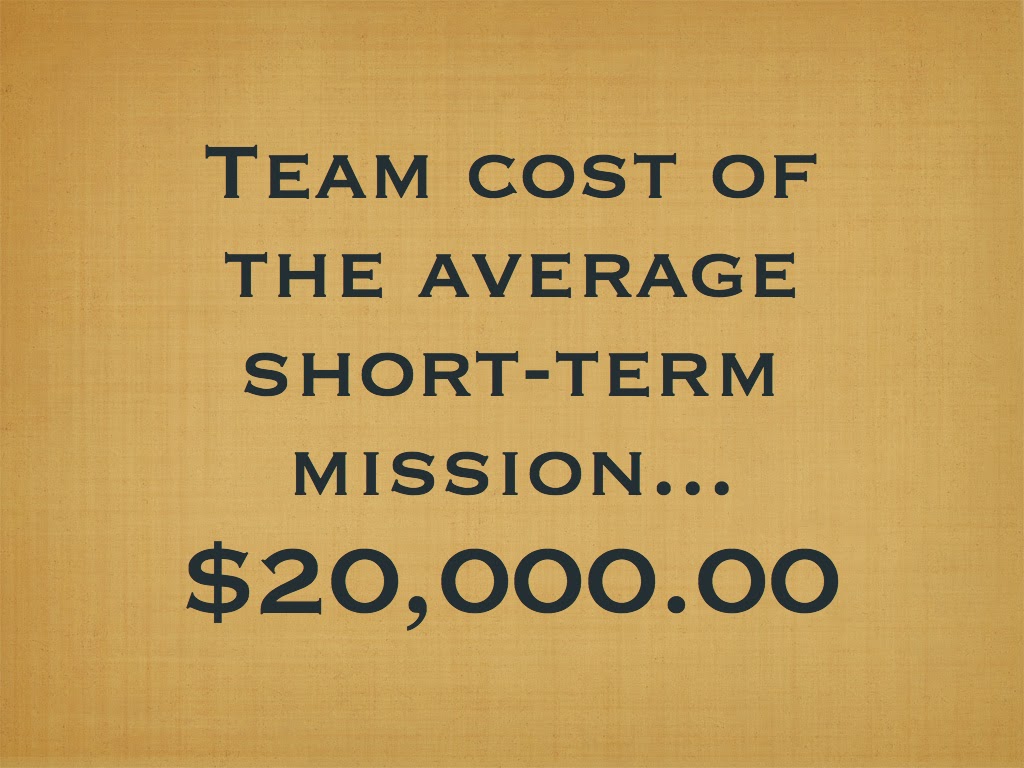 So let’s put little Billy and his networks to work not just for this mission, but the larger Kingdom need. And when that extra support comes in, give it directly in support of the local missionary with whom Billy is working.

Give to their denomination, their organization, or directly to their mission, but make it clear that the funds are a direct gift to the mission and ministry of the missionary you are serving.

This type of approach will go a long way towards helping our long-term in country missionaries achieve financial stability, fund a vision that often goes unreached for lack of resources and see the value of short term mission.

Imagine the impact this could have on a global scale.

If young people knew they could have financial security on the mission field, they may be more willing to enthusiastically meet the ongoing call for career in-country missionaries.

If those of us in the field knew with certainty that we had the resources available, in many cases, we could move from Christian relief to Christian development. Churches would be planted, workers would be resourced, lives would be changed and God’s Kingdom would grow.

If I could rerun that conversation I had with the pastor who suggested paying host receivers for their time was bad stewardship, here’s what I would say.

Bad stewardship on the part of career missionaries, churches, groups and individuals is a failure to leverage this billion dollar industry for the greater good of the Kingdom and financially provide for our ongoing Great Commission work now and for generations to come.

[The 1.6 million statistic is from Robert Wuthnow, author of Boundless Faith, the Global Outreach of American Churches.  The $20,000.00 STM team statistic is from Asher Sargent, long time friend and Mission Pastor at Cole Community Church in Boise Idaho.