What's in your Wallet?

Recently the question "What's in your wallet?" has become known as the advertising slogan Capital One and their multitude of charge cards.  This got me to thinking...

Over the years missions work and by extension missionaries have changed.

Years ago when a missionary for Jesus left the shores of his or her home country, the friends, family and church of that person held a wake or funeral.  Because of the difficulty of travel, likelihood of disease or danger striking, and short life spans in general, everyone knew it was not see you later, but goodbye.

When that person landed in his new land he set out to make new friends, build or find a house and put down roots.  His first task was to become part of the community he was sent to serve.  Locals saw a commitment to be part of them and this was a major step in the advancement of the Gospel around the globe.

For whatever other shortcomings we can now trace to bad missions work, the emphasis that we had on becoming part of the community we were serving was and is not one of them.

Sadly, we are quickly leaving this attitude behind, and it is not just in the short-term world.

Recently I was in Mexico City and was greeted by a US Missionary.  Like me, he has been serving in Mexico for 20 years.  He married a beautiful Mexican woman, his kids were born in Mexico and he helps pastor a church in a small colonia of about 4000 people hidden among 22 million other inhabitants.

He also lives where Mexicans live.  His house is typical for his area, his neighbors are all Mexican, and he is not dreaming of the day he will be coming back to the states. Clearly he has given his heart to Mexico and her people.

Too bad my experiences with Rod, whose blog you can read here,  are not typical.

I asked a good friend years ago why he was serving in Kenya.  Was there a specific call or experience that led him there?  "No" he answered, "there was just an opening."  When I asked him where he lived, he said he lived where the other missionaries lived... in a small gated community.

I have regularly sat and listened as US based missionaries on home leave make jokes and mock the country where they are serving.  It breaks my heart because if the people who our churches send to be "like Jesus" cannot be counted on to be an advocate for the country they are serving, who can?

Short-term mission is here to stay.  As surely as the monarch butterfly migrates each year and the swallows return to Capistrano, thousands of people will annually leave the shores of the US to serve in other countries.  They will go through the rituals of getting prepared, making sure their to do list is all covered.

And then they will make one final switch sometime before they arrive on site.  They will take their US money out of their wallet and replace it with the currency of the country they are going to serve.

I just wish we could switch our hearts as easily to that country. 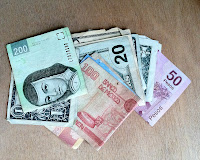 A few years back I asked my wife out to dinner.  I was pretty embarrassed when the check came.  But it wasn't because I had no money.  It was because I had the wrong money.  I was loaded with Mexican pesos.  My wife wasn't surprised, having learned long ago that Mexico had become my adopted country.

When Alec Baldwin asks in that Capital One commercial what's in your wallet, he isn't even aware of how profound that question is.

When I think about a new generation of missionaries traveling around the globe to replace the fossils of the current missionary age like me, I hope and pray that their answer to Alec's question is not Capital One or dollars.

Because the first step in joining the community you are going to serve in knowing where your heart is.  That's why when Tim Dearborn, author of Beyond Duty, asked a Haitian Pastor what someone must do to be a good missionary to Haiti, the simple answer he received was "Love Haitians!"

Missions is about heart.

What's in your wallet?
Posted by Dave Miller at 2:51 PM

Dave, that for your guidance.

My 22 year old daughter in Central America for the past six months. She is feeling low, lonely, misses home and feels disconnected from Christ.

I reminded her of a quote attributed to Jim Elliott (perhaps the gist from the 1600s):

"He is no fool who gives what he cannot keep to gain that which he cannot lose."

I reminded her to always seek peace between her heart and God; asking her if she is considering what part of her is doing work in the hearts of her young students. I asked if she teaching them something that will stay with them forever? And if not, would doing so bring her closer to God?